In this example series we will develop a lamp control from scratch. Starting from a simple On/Off switch, we will add further features like brightness adjustment and motion detection step-by-step while introducing new statechart elements with each iteration. In that way you will learn how to use:

This example is a good starting point to dive into YAKINDU Statechart Tools headfirst. 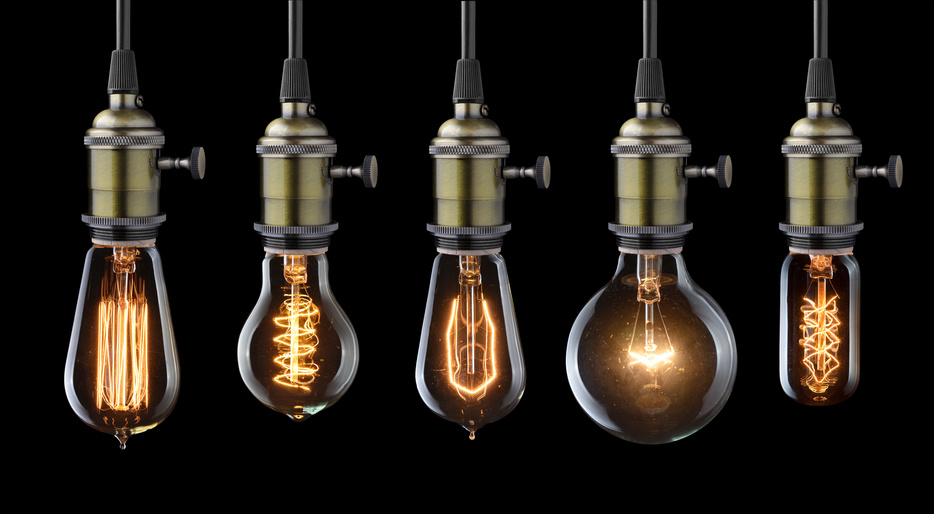 The First Iteration: A Simple Switch

This is the most basic way to model a light switch. When the operate event is raised, the light switch changes back and forth between the On and Off states. 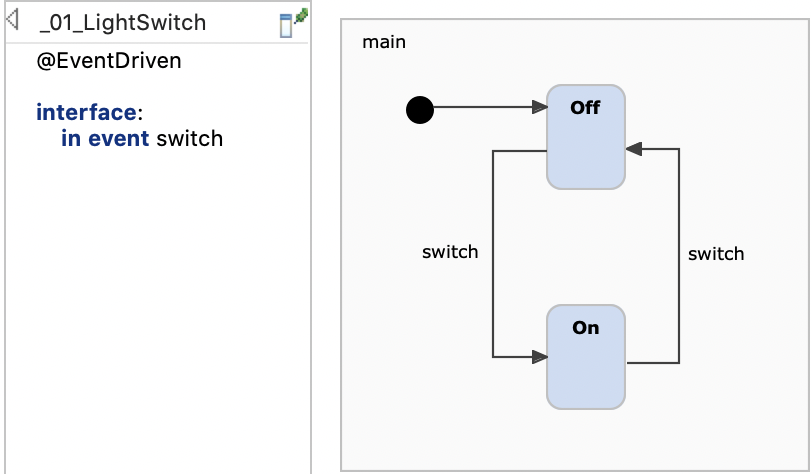 The statechart can be simulated in YAKINDU Statechart Tools, but since the operate event is declared as internal it cannot be raised from any external client code.

A statechart is accesible from the outside, i. e. from client code, via interfaces. This light switch version has an interface named user, and this interface provides the user.operate event to the outside so that it can be raised externally. Events declared as internal interface can – nomen est omen – only be used internally. YAKINDU SCT does not generate any methods to interact with internal objects except for the state machine itself.

While the classic theory of input/output automata is only aware of events, Harel statecharts and YAKINDU SCT have many more features, including variables.

For this purpose, our assumed light switch no longer has only a single switch to turn the light on and off. Now it has two buttons:

When the user operates the "on" button for the first time, i. e. the user.on_button event is raised, the light is turned on at its lowest brightness level of 1. The state machine triggers the transition leading from the Off state to the On state. This transition has an action user.brightness = 1 to set the brightness to 1.

Operating the Off button switches off the light. The dimmer will not remember the last brightness level and will restart with a brightness of 1 when the "on" button is pushed again.

The example shows how to manipulate a variable by an action as well how to use it in a guard condition in transitions.

The sensor is modeled by an additional sensor interface. It has a single event named motion event. The sensor raises this event when it detects a motion.

For modeling the behavior of the light switch with a motion sensor, composite states come in handy, another important feature of YAKINDU SCT. A composite state is a state that contains one or more other states (substates). One of the advantages is the possibility to group states into logical compounds and thus make the statechart more comprehensible.

In the model depicted below, the initial state defines the MotionSensing composite state as the first active state. This composite state has its own initial state, pointing to the Off state. A signal from the motion sensor, i. e. raising the sensor.motion event, transitions to the On state and sets the brightness to 1 via the On state's entry action. Subsequent sensor.motion events keep the state machine in the On state. After 30 seconds without any signal from the motion sensor the execution flow transitions to the Off state and the light is turned off again.

When the user pushes the "on" button, the state machine transitions from the MotionSensing composite state to the Manual state, regardless of whether the active substate of MotionSensing was Off or On.

The Manual state's entry action increases the brightness by one, so that the light is turned on when the source state was Off and turned one step brighter if the source state was On. The entry action is also executed each time the user.on_button event is raised, until the brightness reaches its maximum. The user.off_button returns to the MotionSensing mode and turns the light off.

If you want to learn more about composite states, you can check out our Hierarchical Statecharts example or the chapter Composite states in our documentation.

This example clarifies how history states work, what they do, and especially what they don't do. To illustrate this, we introduce another mode to our light switch: twilight / luminosity control. When operating in twilight mode, the light switch automatically turns on the light when it is dark and turns it off when it is bright. For this purpose we introduce a luminosity sensor. It permanently senses the ambient brightness and fires lum_sensor.bright or lum_sensor.dark events all the time. It is out of scope how "dark" and "bright" are defined and how they are configured in the luminosity sensor. Suffice to say that the sensor is always raising events – say, multiple times per second – and that each event is either lum_sensor.bright or lum_sensor.dark.

The light switch is either operated manually or operates automatically. When in automatic mode, the light switch functions either as a twilight switch as explained above or as a montion sense switch, see the previous section. The user interface gets another button to toggle between the two modes via the user.mode_button event. We should have added a third automatic mode where the light switch doesn't do anything but simply turning the light of. However, for brevity we left that out resp. as an exercise to the reader.

The light switch is starting to change into a full light control module. Its statechart now looks like this:

The automatic modes are grouped into the Automatic composite state. That state is subdivided into a composite state for the twilight functionality and another one for motion sensing. We have discussed motion sensing before, but the Twilight composite state deserves some explanation. When the ambient brightness is changing from day to night or from night to day, the luminosity sensor doesn't deliver consistent values. Rather small fluctuations are causing a succession of quickly alternating lum_sensor.dark and lum_sensor.bright events. Having each of these events turn the light on or off, respectively, would result in a flickering lamp for some time during twilight. To avoid this, the state machine requires a certain permanence in the luminosity sensor's results before actually toggling the light's state.

This is done like this: During the day the Twilight composite state's Off substate is active. In this state the state machine listens for lum_sensor.dark events. These events are starting to be raised when it is about to get dark. First they come in spuriously, later there are more lum_sensor.dark than lum_sensor.bright events within a given period of time, until only lum_sensor.dark events are raised. The first lum_sensor.dark changes the state from Off to Dark_waiting. In this state we are waiting until a certain time has passed, e. g. 10 seconds, to be configured as constant lum_sensor.wait_time. However, each lum_sensor.bright event brings the state machine back to the Off. Only if the waiting time has passed without any lum_sensor.bright interfering, the On state is reached and the light is turned on. The analogous happens in the morning when the first light of the day is close. The twilight switch is also robust against short disruptions like overshadowing the sensor during the day or illuminating it briefly by a car's headlamps during the night.

An important requirement is that any of the automatic modes can be interrupted at any time by manually operating the light switch via user.on_button. When the user later raises a user.off_button event, the state machine should return to that particular substate somewhere down in the Automatic composite state that was active before the manual intervention. Similarly, when toggling between Twilight and MotionSensing, the state machine should remember the respective active substate and return there when control is turned back.

That's what history states are good for. The statechart contains three shallow history states. There is one in Twilight, one in MotionSensing, and one in the Automatic composite state the former two are nested in.

More information on history states can also be found in the History States example or the corresponding chapter in our documentation.

This is the final version of the light switch, which has become a light computer. This version adds a presence simulation, which means it behaves as if a person operated the light at sensible and irregular intervals although nobody is present. The motion detection and the twilight detection are left out for clarity.

To implement this functionality, we are finally hitting the limits of the statechart language. It neither provides a function returning random values nor one to get the current date and time. However, YAKINDU SCT allows you to implement your own operations to overcome these limitations. An operation is called from the state machine itself, so you don't have to care about when and how they will be called. You can receive arguments from the state machine and return a value, exactly like a normal function or method call.

We use this feature here to do two things:

Furthermore, we make use of three orthogonal states, which you can see inside of the state Wait. The reason for this is that these three states are then executed virtually in parallel (their order is relevant, though). This way, we can have three tiny statecharts that count down every 60 seconds, check if a new waiting time needs to be calculated and if the light's state needs to be switched (the two latter ones happen at the same time, but the functionality is different). The other features of the light switch from earlier iterations are stripped away here to keep the statechart comprehensible.