itemis has now been working for the book retail company Thalia for more than ten years. In this long-term cooperation, we have successfully accompanied the path from externally developed monoliths to agilely developed self-contained systems. In addition to technical implementations, which are still valid, a strong partnership has also developed on a human level. Thalia is a book retail and service company based in Hagen. The company currently owns around 360 bookstores in Germany and Austria as well as 50% of the shares in the more than 30 Orell Füssli Thalia AG bookstores in Switzerland. Thalia is (in terms of sales) the market leader in the retail book trade in German-speaking countries.

itemis AG has successfully accompanied Thalia on its way since 2012 and played a key role in driving forward the establishment of its own IT development department and the further development of the eCommerce shop and merchandise management systems.

During this time, itemis employees and teams were involved in various projects in the planning, implementation and operation of the eCommerce systems and have also made the change from monolithic legacy systems to a system architecture based on self-contained systems and the connection of SAP as a merchandise management system for successfully helped to shape the eCommerce area.

During this time, itemis AG reacted flexibly to the respective requirements of Thalia and contributed expertise in the areas of business analysis, software architecture and development, project management and agile development and control.

The cooperation was always based on trust and at eye level, which made itemis AG a reliable and strong partner for Thalia in achieving corporate goals and the first contact and consultant for further development.

Projects and approach since 2012

A recommendation gave itemis the chance to demonstrate its expertise in the field of domain-specific languages as part of a trade. The subsequent implementation of the categorization tool for the eCommerce area in 2012 laid the foundation for the now long-term and successful cooperation between itemis and Thalia. At the beginning of the business relationship in 2012, Thalia worked with a historically grown, monolithic eCommerce platform that was completely developed by an external service provider. In addition to the high level of external dependency, the main problem was the long and complicated development and release cycles. The lack of technical know-how about the platform also posed a not inconsiderable risk for Thalia.

The management of Thalia consequently decided to set up their own IT department. It was clear to those responsible that such a project could not be realized overnight. In addition to supporting the development of the IT department and the transfer of know-how, itemis also played key roles in the conversion of the Thalia web shop from a legacy merchandise management system to the SAP merchandise management system (CEBRA project) also used in the sales business, which was carried out from 2013, and thus contributed made a significant contribution to the successful changeover in ongoing 24x7 operation.

The conceptual strengths ensured that itemis won the pitch for the new article importer in 2013 and subsequently developed it. The implementation took place for the first time at Thalia on site in close cooperation between the service provider and the customer. This created the basis for further trusting and sustainable cooperation, so that itemis subsequently came into play in various other project plans.

The world is turning fast – too fast for rigid structures, both technically and organizationally. For this reason, it was time for Thalia to take the next important step in 2016, and itemis was also there to help. The CEBRA project was extended to the associated brands in Austria and Switzerland. In the same year, the continuous transformation from purchased monoliths to agilely developed self-contained systems was initiated using the Brownfield-approach. Based on this target image, itemis provided agile coaches and took on interim roles as Scrum Master and Product Owner. 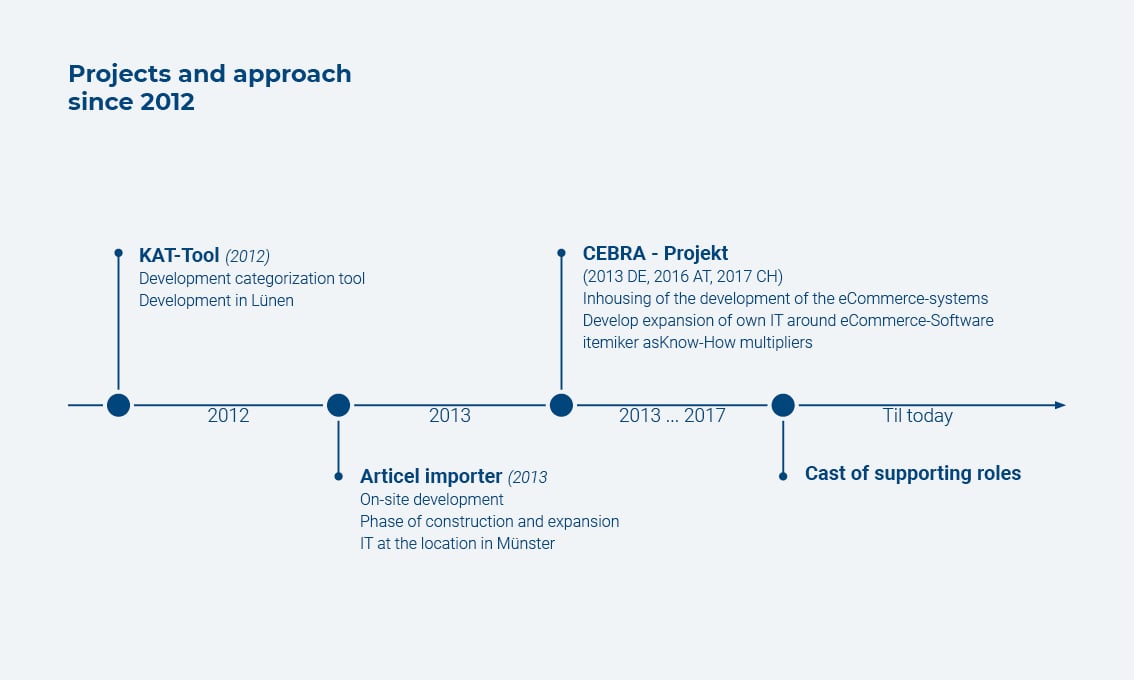 The itemis employees contributed their many years of experience in agile development to the transformation. At management level, itemis carried out SCRUM-coachings and generally supported the introduction of new technologies such as vue.js.

The itemis employees have been developing a new product information management system since 2018. They provide support in the area of conception and implementation. The challenge of remote work caused by the pandemic was successfully mastered, not least because of the long-standing partnership and the special relationship of trust. In the future, this will result in new working models for successful cooperation across companies.