Goal: Identification of risks based on recorded threat scenarios and attack steps. Risks illustrate the risk level present on a threat scenario, attack step, or security control. A risk element can be used to determine the impacted stakeholder, related impact categories and see the control scenarios side by side. 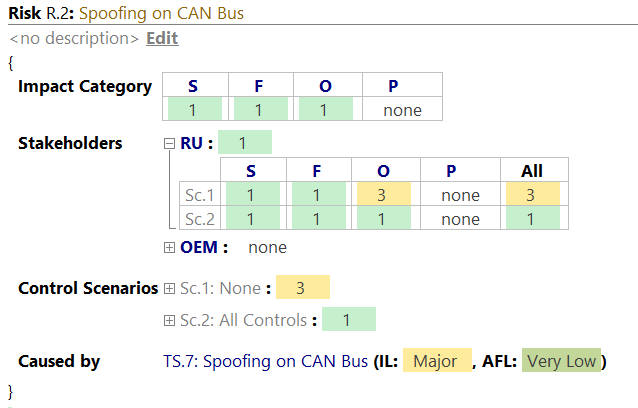 A risk has the following properties:

You may create the above mentioned risk elements manually. However, to speed things up, it is recommended to use the risk assistant which will suggest creating a risk for each threat scenario in order to be inline with the ISO/SAE 21434 suggestion.

As with all assistants, you can either accept suggestions which results in creating a risk for the assessed threat scenario. Alternatively, you can reject the suggestion and give it a rationale. The following image depicts the assistant after generating the links between threat scenarios TS.7, TS.8 and TS.9 and its corresponding risk elements R.2, R.3 and R.1:

The inspector of a security control allows you to group security controls in control groups for a later usage in control scenarios (cf. section Compare scenarios ). To add a group, open the inspector of a control and type the desired name into it. It will be highlighted in red. After that, run the completion ( [Ctrl+Space]) to create the group. It will then be highlighted in blue:

To add another group, just hit @ or @[Return] as usual. Existing groups can be selected with [Ctrl+Space]. This means, you can either create new control groups in-line within the control, or in the above mentioned control groups chunk.

Risk is calculated by propagating attack feasibility and transformations together up the attack tree, and then propagating the resulting impact and risk down from each threat scenario. itemis Security Analyst then picks the path that yielded the highest risk and displays it.

Security elements can be expressed in the same terms as propagation expressions: as expressions with may and must. This table shows how they relate: